I recently found out about Skirt Week which is being hosted by crafterhours. Since I hadn't made Sweet Pea a skirt yet, I decided to make something for her. The gears started turning immediately, and this is what I came up with: Little Bow Peep 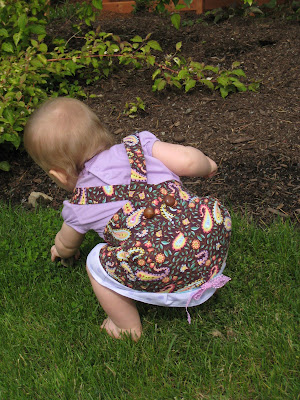 There are buttons on the inside holding the straps in place. I made it this way so I'd have the option to remove them. 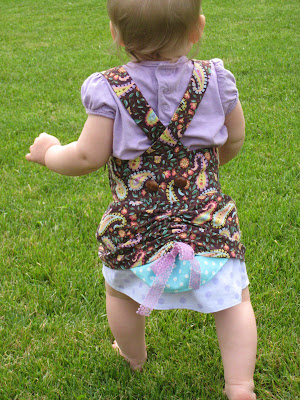 Surprise! The bow at the bottom can be tightened to reveal a cute little ruffle! 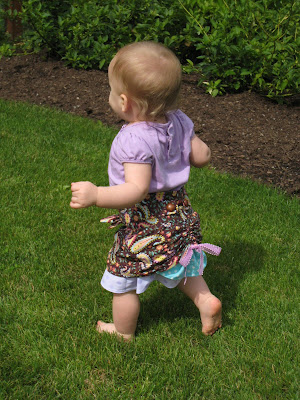 The buttons on the back were a last minute thing (In fact, it was just before the "photo shoot" and Sweet Pea was wearing it :)) I added the buttons so the straps could be even more versatile and convert into a sash around the waist. 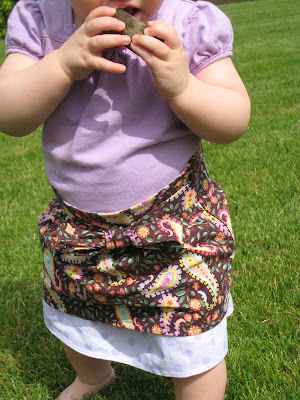 Now, the trick will be trying to figure out how to blow this up into a version for ME! :)
Posted by Jennifer at 4:01 PM No comments:

Lately I've been feeling a sense of balance and calm in my life. Things are moving steadily along at a manageable and enjoyable pace. Often in the last several years I have felt like one aspect of my duties is suffering - like the housework or responsibilities to the kids or making good dinners or checking in with dear friends or any number of things. It seemed I could only be good at one thing at a time while the others suffered. But lately I feel like hours I didn't know existed have opened up to me and things are just getting done! I can't explain it except that I spent a lot of time in thought and prayer about it, and things seem to have fallen into place. A little organization and prioritizing have gone a long way. I've even found time to enjoy guilt-free crafting and sewing. Awwww, sewing time just is that much more enjoyable when I don't have a nagging feeling that I really should be doing something else.

Or, that nagging feeling that I really should be finishing a custom order before I start any more projects :). So I tackled this one recently: (sorry about the lousy lighting in these pics - I took them first thing in the morning just before they were picked up.) 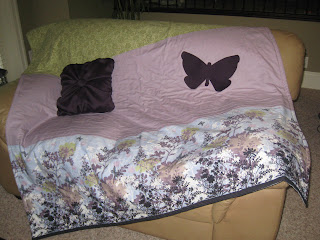 I was asked to make a few items for a little girl's room. I made a comforter out of some gorgeous butterfly fabric picked out by her mom. The original plan was to make a toddler-size comforter, but later Mom decided a twin-size would allow her to grow into it. I agreed, and set to work making some changes to the original design. I added a piece of mauve fabric to the middle, but I thought it was a touch boring. A few pintucks and an appliqued butterfly later, and it looked just right. I hope she likes it as much as I do!

The mom also asked if I could make a little pillow for her bed too. The lovely satin-like fabric she picked out inspired me to make something with gathers to show off the sheen. After some playing with the fabric, I decided on the pillow above. It's the first decorative pillow I've made, so it was a fun new project. 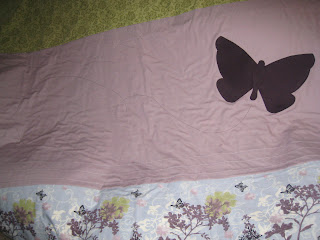 Next up is a little chair to match the comforter, but sadly I bought the wrong kind of Velcro (FYI, don't buy adhesive Velcro for sewing...gummed up needles are no fun...), so I have to wait until my next trip to the fabric store.

I've been eying some darling little fabric boots on Flikr. I bookmarked them months ago, but now that my daughter is walking, I think she's ready for a pair :). I made a muslin mock-up first, made some changes and then made this version out of some vintage fabric that was given to me. Gotta love a pair of (almost) free shoes! 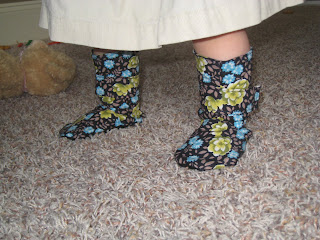 The main part of the boot is a Robeez-style, but I added to the height to make them look like boots. There is elastic around the ankles and a Velcro strap around the upper part so they stay on nice a snug. Sweet Pea has been walking around in them for an hour now with no problems! 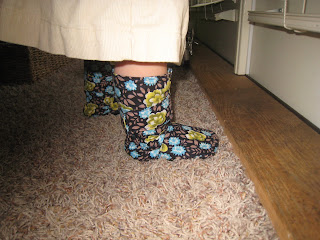 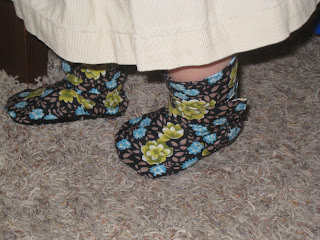 While I love this fabric and have decided to make her a little dress out of this same stuff, I'm not sure if I like it as a boot. I'm thinking it's kind of busy. My plan is to make another pair in brown or black, which will be much more versatile. What do you think?
Posted by Jennifer at 4:26 PM No comments:

From bridal showers to weddings and fall cleaning to party hosting, the last few months have been fun, but busy. I'm definitely ready to get back into routine and squeeze in a little down time...namely sewing. Christmas is right around the corner, and I'm hoping to finish a couple aprons for gift-giving. They are actually almost finished, but now my serger decided to be cranky, so I think I need to bring it in for servicing. Blah. At least I was able to finish a custom order diaper bag, which didn't require any serging. 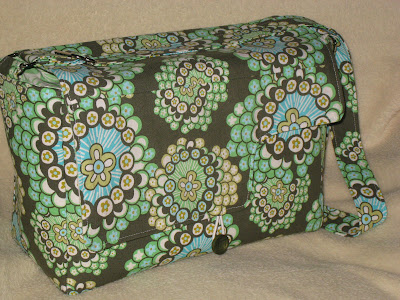 It was a custom order for a friend's sister. I hope she likes it! She seemed pretty flexible about the dimensions and details, so I kept it simple. It was fun sewing a diaper bag again. I haven't made one since before Sweet Pea was born, and that one was kind of complicated. Lots of measuring + mathematics = headache.

My goals for this month are to finish Peanut's quilt (remember that quilt I started MONTHS ago!), make a pinafore/apron for my niece, and finish a custom duvet cover. No, these things shouldn't take too long, but I tend to plug away at my sewing projects a little bit every couple days. So, it does take a little while. On top of that, I do like to sit down and relax with some knitting every few nights. My hands like to stay busy, so eventually everything will get finished :).
Posted by Jennifer at 2:48 PM 4 comments: 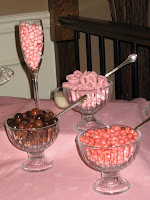 After weeks and months of preparation, my sister and her fiance got married last week. Congrats you two! While they honeymoon in a beautiful, sunny place, our little family is gradually getting things back to normal. I finally tackled a few custom sewing orders (sorry ladies...I appreciate you understanding the busy life of a young mama). I also decided to check in here and update y'all.

In late September I hosted a bridal shower for my sister. It was so much fun preparing and decorating for the party! I actually get a little giddy when I'm planning a party. I love thinking about all the little details from the menu to what candles I want to light. So fun!

A few months ago I discovered the website of Amy Atlas. Wow, she makes dessert tables look gorgeous! So, I got a some inspiration from her and set up a "Sweet Table" at the party. The theme was pink, brown, and cherry blossoms. It was fun planning a 'girlie' party. 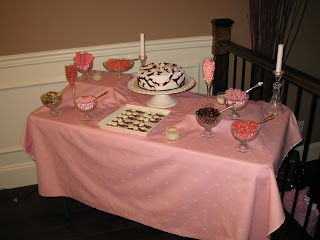 I've seen cherry blossom cakes on Flickr, and I've always thought they were lovely. I was excited to use my sister's shower as an excuse to make one myself. My sister-in-law, a talented cake decorator, nicely allowed me to borrow her supplies and taught me how to make the blossoms. It was a fun project to tackle and I was so happy with how it turned out! 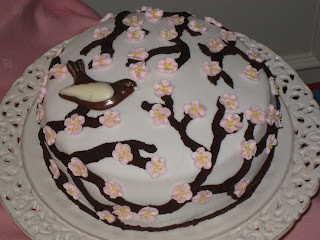 I also tackled chocolate-making for the first time. I used a mold called "Birds and Blossoms" and purchased melting wafers online. I didn't realize how simple choclate-making can be! I expected a big chocolate mess on my stove and in numerous pots and pans. But I was able to melt the chocolate in the microwave and used a spoon and toothpick to fill the molds - easy peasie! 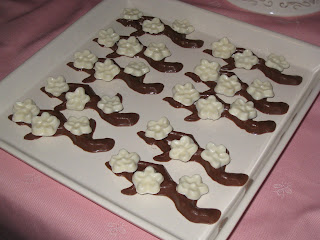 I didn't take as many pictures at the wedding as I would have liked. The role of "Matron of Honor" and "Mama" kept me busy enough. My sister has amazing taste, and everything was lovely - you'll just have to take my word on that :). Everything was black and white damask with hints of burnt orange and gold - gorgeous!

One last minute sewing project was a jacket for my little Sweet Pea. I found a black and white dress at Old Navy that fit the wedding theme perfectly. The only down side with the dress was that it was a summer dress and had very small cap sleeves. It was much to cool for an October wedding. So last week I decided to whip up a cute little jacket for her to wear. I made a pattern from one of her dresses out of muslin. The jacket ended up being a little snug, but at least she's a baby and doesn't have to move around too much :). This isn't the greatest photo, but at least you can see most of the jacket and a bit of the dress. 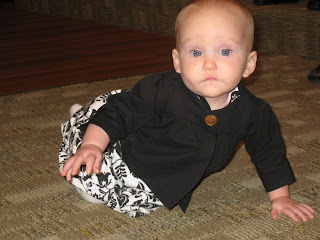 We had a lovely day and I hope my sister and new brother enjoyed themselves too! Now on to some sewing projects. Next up is finishing a diaper bag as well as some aprons. I have a few aprons that will be ready just in time for Christmas gift giving, if you are interested in purchasing one or more just let me know. I'll post them as soon as they're finished! Stay tuned!
Posted by Jennifer at 11:09 AM 1 comment:

Judi is having ANOTHER giveaway! Go check it out here! I think all I've been blogging about lately has been giveaways :). One of these days I'll get back into a sewing groove, but right now I'm busy with my kiddies - one is being potty trained and the other is starting to crawl... I'm having a ton of fun, there just isn't much sewing happening. As the weather starts getting more chilly and crisp, I think the sewing itch will kick in soon enough. Stay tuned!
Posted by Jennifer at 2:15 PM 1 comment:

Judi is having another great giveaway on her blog - this time it's for a lovely bundle of fabric. Just leave a comment on her blog to be entered.

Also, just a quick update from me: I'm plugging away at my sewing projects, but only a little bit every couple days. Life has gotten so busy the last couple weeks! We're in the middle of potty training Peanut and we're trying to squeeze in all kinds of fun in the sun before the summer ends. I'll have to post some "in progress" photos one of these days. I usually like to save photos for when I'm finished a project, but I don't know how many projects I'll actually finish this month... I just have a bunch on the go...

I'm hoping to get back into a more consistent sewing groove when the weather cools down. I get lots of inspiration in the summer, but don't actually find the time to sew things until the fall/winter. I have a little sketchbook next to my sewing machine that I doodle all my bag, quilt, and clothing designs. (There is also the odd sticky note on the night stand from "middle-of-the-night-should-be-sleeping" bursts of ideas. If I actually have a "hmmm...what should I sew?" moment, I just pull out my sketchbook for ideas. It's always fun to tackle a project that has been tossing around in my brain for a while and attempt to make it a reality. Fun, fun!
Posted by Jennifer at 8:23 AM No comments:

Check out the results here.